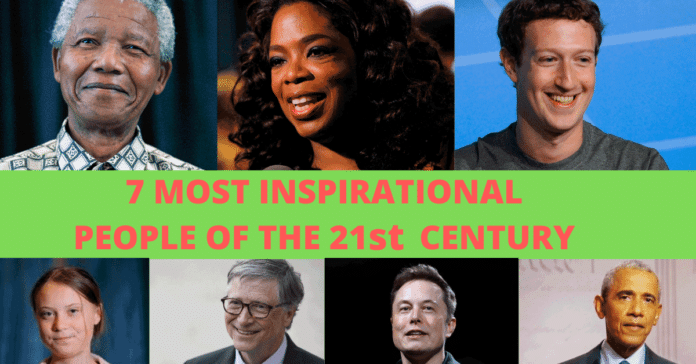 “Success is most often achieved by those who don’t know that failure is inevitable.” – Coco Chanel

You might have to go through a few more hurdles, but one day, eventually, you’re gonna reach where you’ve been striving to get ruthlessly. Similarly, the personalities that you’re about to read also went through the same phase as you all did. They fell hundreds of times and still didn’t give up, they tried and tried until they could say they made it. So, here is the list of 7 most inspirational people of the 21st century who have motivated the whole world.

The first person in our list of inspirational people is Bill Gates. William Henry Gates III is an American entrepreneur, programmer, investor, and philanthropist. He, along with Paul Allen co-founded Microsoft, which is the number 1 software company in the world. In 2015 their revenue was $110.4 billion. Bill Gates is the second richest man on earth with a net worth of 118.2 billion USD. He was the CEO of Microsoft until January 2000, currently, he is the Technology Advisor to CEO Satya Nadella. He focuses a lot of his time on the Bill & Melinda Gates Foundation, which is why he has taken a less demanding role at Microsoft so that he can focus more on philanthropy.

Elon Reeve Musk is a South African-born American entrepreneur and businessman who founded X.com in 1999 (which later became PayPal), SpaceX in 2002, and Tesla Motors in 2003. Musk became a multimillionaire in his late 20s when he sold his start-up company, Zip2, to a division of Compaq Computers. Musk made headlines in May 2012, when SpaceX launched a rocket that would send the first commercial vehicle to the International Space Station. He bolstered his portfolio with the purchase of SolarCity in 2016 and cemented his standing as a leader of industry by taking on an advisory role in the early days of President Donald Trump’s administration.

“When something is important enough, you do it even if the odds are not in your favor.” – Elon Musk

Another person who is picked for our list of inspirational people is Barack Hussein Obama II, 44th and the first African-American president of the United States. In 1996 he was elected to the Illinois Senate, where, most notably, he helped pass legislation that tightened campaign finance regulations, expanded health care to poor families, and reformed criminal justice and welfare laws. Regarding the improvement of the image of the United States abroad, Obama took a number of steps that indicated a significant shift in tone. And in 2009, he was awarded the Nobel Peace Prize for his extraordinary efforts to strengthen international diplomacy and cooperation between people.

Greta Tintin Eleonora Ernman Thunberg is a Swedish activist, who worked to address the problem of climate change, founding a movement known as Fridays for Future in 2018. She was diagnosed with Asperger syndrome, which is now considered an autism spectrum disorder (ASD). Seeking to make a greater impact, Thunberg attempted to spur lawmakers into addressing climate change. For almost three weeks before the Swedish election in September 2018, she missed school to sit outside the country’s parliament with a sign that stated: “Skolstrejk för Klimatet” (School Strike for Climate). Her action inspired hundreds of thousands of students around the world to participate in their own Fridays for Future.

“We showed that we are united and that we, young people, are unstoppable.” – Greta Thunberg

Oprah Gail Winfrey is an influential talk show host, author, philanthropist, actress, and media personality. She has played a key role in modern American life, shaping cultural trends and promoting various liberal causes. Through her talk shows and books, she has focused on many issues facing American women. She has been an important role model for black American women, breaking down many invisible barriers. According to Forbes
magazine, Winfrey was the richest African American of the 20th century and the world’s only Black billionaire for three years running. Life magazine hailed her as the most influential woman of her generation. In November 2013, Winfrey received the nation’s highest civilian honor, the Presidential Medal of Freedom. President Barack Obama gave her this award for her contributions to her country.

“Be thankful for what you have; you’ll end up having more. If you concentrate on what you don’t have, you will never, ever have enough.” – Oprah Winfrey

Nelson Rolihlahla Mandela was South Africa’s most important leader and one of the greatest statesmen and served as President from 1994 to 1999. He was awarded the Nobel Peace Prize in 1993 for ending racial segregation (Apartheid) in South Africa peacefully, after about 50 years of white supremacy, and for laying the foundations for democracy. In 1944, he contributed to the creation of the African National Congress (ANC), South Africa’s most important party aimed at ending injustice towards black people perpetrated by the National Party, the expression of the white population, the Afrikaners. Throughout the 27 years Mandela spent in prison, his fame increased steadily. His silent suffering contributed to raising pressure on the South African government and apartheid, making him an international symbol of resistance and a martyr of the fight against racism.

“Do not judge me by my successes, judge me by how many times I fell and got back up again.” – Nelson Mandela

Zuckerberg and his friends Dustin Moskovitz, Chris Hughes, and Eduardo Saverin created Facebook, a site that allowed users to create their profiles, upload photos, and communicate with other users. The group ran the site out of a dorm room at Harvard University until June 2004. That year Zuckerberg dropped out of college and moved the company to Palo Alto, California. By the end of 2004, Facebook had 1 million users.

“I think a simple rule of business is, if you do the things that are easier first, then you can actually make a lot of progress” – Mark Zuckerberg

Who are some inspirational people (celebrities)?

Here are 10 amazing celebrities you should look to for inspiration.

How is Bill Gates an inspiration?

Bill Gates’s business acumen, devotion to software design and innovation, and subsequent determination to give back through charitable organizations makes him inspirational to people everywhere.

Why is Michael Jordan inspirational?

While it’s obvious that Jordan is a naturally gifted athlete, much of what has made him so successful is his mindset. He pushed himself through hard work and always met challenges head-on. He has given his all in everything he has ever done. Jordan has a remarkable ability to inspire and motivate through his words.

Who are some inspirational leaders?