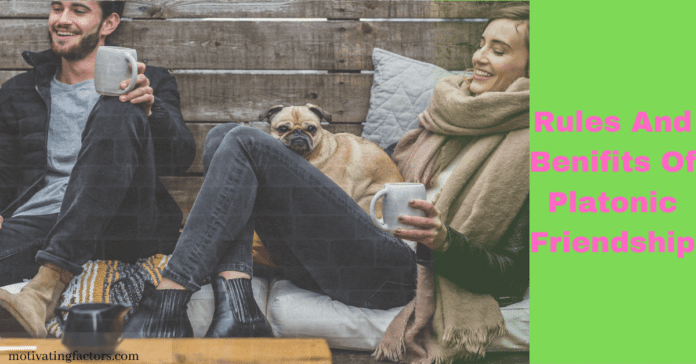 So, there I was standing in front of her porch with my feelings for her. The school was only 5 minutes away from her house, but that day, it felt like an eternity. The sexual tension was so magnetic between us, mostly for me that I was having a hard time even looking in her eyes. Anyways, fast forward I came back home from school and started having all these questions: “Should I try to date her?” “Will she accept me as her boyfriend?” and other million questions. Although I was attracted to her, I didn’t really feel that thing which one feels when they are in love. So despite experiencing those feelings, I didn’t tell any of that to her and I decided to be ‘just friends’ and keep what we currently had: our friendship. Or should I say our ‘Platonic Friendship’?

Now I guess you’ve understood what it means by a Platonic Friendship. You might have heard a lot of people say “A boy and a girl can never be just friends.” But that’s not entirely true, talking from experience it’s very possible to be close friends with anyone, irrespective of their gender. So, if you have felt like me for your close friend of the opposite gender, don’t worry, take a chill pill. Because you’re going to learn the benefits and how to maintain a Platonic friendship with your close friend without having sexual tension and awkward moments when you’re with them.

Have you ever been on a date and you’re so nervous that you didn’t know what to say or how to say exactly what you want to say? I’ve been in this situation myself and believe me it’s not an easy thing. Lots of people find it hard to have a proper and casual conversation with the people of the opposite sex whom they don’t know too well. This then leads to miscommunication and conflicts in interest. The common reason for this is because we don’t have enough contacts and we’re not used to communicating with the opposite sex. But, when you’re in a platonic friendship, you’re very comfortable talking about things with your platonic friend, which you can’t with your sexual partner. This might help you to talk freely about things and be more open.

2. Teaches about the opposite sex

As I already mentioned above, the majority of people think that a man and a woman can’t be just friends. They don’t believe in the existence of platonic friendship between man and woman. This kind of attitude has prevented us from finding solutions that might help us understand things between genders better. That’s where platonic friendship can play an important role as a bridge between genders. Especially, in a heterosexual friendship, couples find it so hard to understand their partners because of the lack of gender knowledge while growing up. Whereas when you are platonic friends with someone of your opposite sex, you not only see that gender as an object for your pleasure but rather appreciate them as people like themselves with diverse emotions, feelings, and needs.

When I was growing up, I hated to do shopping in malls, because I used to think it was such a girly thing to do. I used to let my parents go shopping for my clothes. That was until I met Emily. I was so surprised when I thought about how much I was missing out on things that girls do. For example, I never had a manicure and pedicure in my life. Emily made me do that. And I do have to admit; I didn’t like it, I loved it. Getting my hands and feet cleaned and decorated in a salon has become one of my guilty pleasures. Anyhow what I’m trying to say is when you have a platonic friend, you get to explore so many new things that your gender usually doesn’t do.

Thus, when you’re in a platonic friendship, there’s no fine line between what’s masculine and what’s feminine.

Ever been in a situation where you are interested in someone, but don’t know how to approach them without being nervous, or scaring them away? This is one of the special benefits you get from being in a platonic friendship. So what you do is you ask your platonic friend to go talk to the target and learn a thing or two about that person and help you out. Since the person you like and your platonic friend are of the same gender, it won’t be hard for them to talk to themselves openly. So, when you have a platonic friend, it means you have someone who can vouch for you and will help you to meet new people.

1. Be aware of your words and actions

Whether it be a friendly, family, or romantic relationship, establishing certain boundaries is necessary for the growth and development of a healthy relationship. For instance, on Emily’s birthday eve, without letting her know, I went to her house at midnight and wished her happy birthday. Now she wasn’t happy with that, and that kind of put a dark stain on our friendship. ‘Why?’ you ask. Because although my intention was good, I kind of overdid it. It might not seem like a big deal but for her, it was because I was the first one to wish her on her birthday (before even his boyfriend did). So, little things like this make big impacts on your platonic friendship. So, take their feelings, too into consideration and ask for permission before doing something big like that.

Now, this is one of the most common problems that lead to the crumbling of a platonic relationship. For example, I’m a guy and when I’m with my male friends, it’s cool to have conversations about sexual stuff, you know like asking “Hey man, how did last night go with that date of yours?” Now, it is totally appropriate when I talk about things like that around my male friend. But when you’re with your platonic friends, you can’t and you definitely shouldn’t have conversations about sexual stuff with them. Despite being open, some people may not feel comfortable talking about too personal stuff like sex with someone of the opposite sex, even if it’s their platonic friend.

To cut a long story short, platonic friendship is not a unicorn, it totally exists. There are many long term benefits of having a platonic relationship, all you need to do is be open-minded and keep these rules in consideration to maintain your platonic friendship.

No, it’s completely normal, cuddling is a fun activity that can be completely platonic. You can express your (platonic) love to your friends with many physical signs. It’s a natural part of being in a friendship.

2. What are the benefits of a platonic friendship?

Here are a few benefits to having platonic friendships:

3. Why do they call it a platonic relationship?

In modern use, it has generally been used to mean a non-romantic relationship between heterosexual opposite-sex friends.The term is named after the philosopher Plato, although the philosopher never used the term himself. He was the first to describe this kind of love. Plato calls this his theory of erôs (meaning “love”).

4. How do you know if a friendship is platonic?

When you’re in a purely platonic friendship, you can hold each other’s gaze for a long time without feeling shy or flustered. Making eye contact with your platonic friend will feel absolutely nothing like that and this should be your biggest clue that what both of you share is nothing romantic.

5. What is platonic intimacy?

Platonic intimacy is exactly what it sounds like. You have an incredibly close relationship with someone, but there is no sexual or romantic interest involved. There will be a deep, often unconditional, love, between you and that person.

6. Can platonic friends fall in love?

HOW TO DEEPEN YOUR LOVE

How to Stop Missing Someone: 10 Easy Ways That Really Work