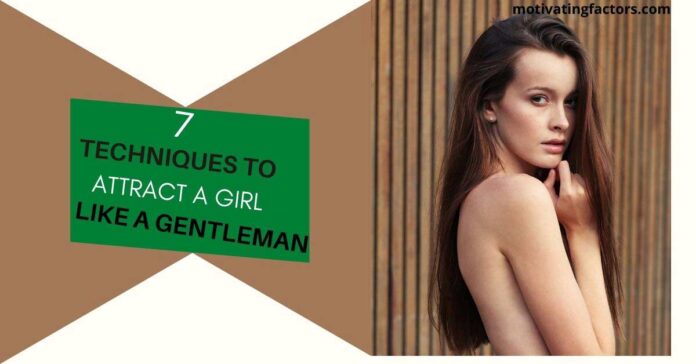 Meanwhile, for all the boys out there, I know the struggle. I’ve been there myself. There’s a whole process involved to attract a girl. Firstly, you need the girl to know that you exist. Secondly, you’ve got to get her to talk to you. Thirdly, and most importantly, you need to make her attracted to you.

However, it’s not everyone’s cup of tea. That is to say, attracting a girl takes a lot of effort and time, but it’s certainly not ‘Mission Impossible’. All you require is devotion and patience, which is exactly what you’ll learn from reading this article. So, be ready to take notes because here are the 7 scientifically proven techniques for how to attract a girl like a gentleman:

Techniques to Attract a Girl

1. Have a sense of humor

When it comes to attracting a girl, humor is the ultimate ‘magnet’ you can have. You can probably put this point on top of your list to attract a girl. That’s because every girl wants to be with a guy who can make her laugh. Having a great sense of humor helps you to communicate with a girl during her rough time. It will ensure you as her friend who cares about her, regardless of good or bad times. However, that doesn’t mean you should crack a joke every minute you spend with her. Instead, you need to create a balance between having good humor and knowing the good time to use it.

Who doesn’t like a man who’s not afraid to take decisions and who’s full of self-confidence? This might be one of the reasons why most of the guys fail to attract a girl. Because, they’re not confident enough to show their worth to her. If you don’t believe in yourself that you can attract a girl, then what makes you think that she’ll be interested in you? When you don’t have self-confidence, a girl sees you as nothing but a boring person. So, try to be more assured, and don’t be afraid to speak to her. Most importantly, show her what you’re worth.

Communication is the key ability to attract a girl. In other words, the way you communicate with a girl determines a lot about your outcome with her. We all know girls like to talk more (a lot more) than us boys. This isn’t a new thing to know. So, try to listen to what she’s trying to say and respond to her with a relevant reply. This will show that you’re not only interested in her body and appearance, but also her opinions. Similarly, when you’re talking, don’t try to mansplain everything to her. That will just make her feel dumb about herself. Therefore, try talking about topics that interest her and keep the conversation flowing.

It doesn’t matter how intelligent, rich, or interesting you are unless you display it by dressing up likewise. A recent poll from over 500 girls shows that girls tend to get attracted to a guy, who’s well-dressed than a guy who’s not. Although they say “Don’t judge a book by its cover.” A girl will certainly judge you by the way you dress. Why? Because it matters to them. Just imagine; you’re trying to attract a girl on a date. So, you put on the same clothes you did for the last 7 days. “What’s the worst that can happen?” I can’t tell you if you’re going to attract her, but you will never hear from her again, of that I’m sure.

6. Be compassionate and patient

This is one of the stages, where lots of guys fail to succeed. I’ve seen men who take every single thing that girls say offensively. They just can’t hold it. Often, girls say something they don’t really mean. But what men do, we take literally everything seriously. To attract a girl, you have to be compassionate and have some patience. You can’t let small things she says let annoy you. When you spill your emotions uncontrollably, you’re telling her that you’re not someone stable and in control. Therefore, you need to become someone who doesn’t get angry with anything easily.

Most guys think that it’s dangerous to take risks with a girl. That brings us to the experimental part of attracting a girl. The reason you try to get a girl’s attention is basically to have a relationship with her. But that doesn’t mean you should try to take things to the bedroom, just not yet. Remember, the key is slow build-up. If you think the conversation is going well, then you can try to be close to her. For instance, tap her shoulder or give a slight touch to her hand, when you agree with her. This will show her that you’re willing to go long. However, if she doesn’t respond or go along with your movements, then it’s better to give her space.

Also Read: How to have a Platonic Friendship: Rules and Benefits

How to attract a girl over text?

When texting a girl do the following:

How to attract a girl on the phone?

The ways to attract a girl on the phone:

How to attract a girl in school without talking to her?

The ways to attract a girl in school without talking to her:

HOW TO DEEPEN YOUR LOVE

How to Stop Missing Someone: 10 Easy Ways That Really Work